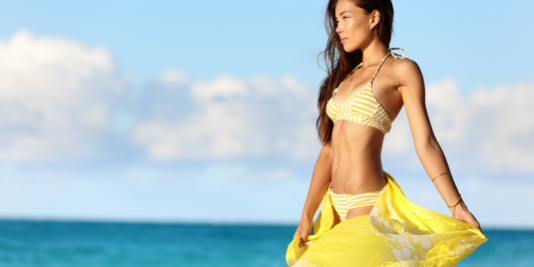 There is another subset of individuals with a poor body image. Those are the ones who had negative reinforcement when they were adolescents. Our brains are wonderful computers. Those who study Neuro-linguistic Programming will tell us that positive affirmations can change our lives. By saying positive mantras over and over our brains begin to believe what we are telling it. This does work – but it takes work.

On the other hand, if someone told a preteen going through puberty that she was fat, or that her thighs were huge, the more she was told this the more she would believe it. Even if it were not true and was said out of meanness or spite. No matter how much weight the girl would lose, she would always feel overweight and believe that her thighs were fat. To reverse this belief takes a great deal of mental work as well.

According to Brown University, Health Education “Body image is a widespread preoccupation. In one study of college students, 74.4% of the normal-weight women stated that they thought about their weight or appearance “all the time” or “frequently.” But the women weren’t alone; the study also found that 46% of the normal-weight men surveyed responded the same way. Encouragement to focus on appearance is at an all-time high in this culture, and with it comes the potential for a significant increase in negative body image. According to the authors of The Adonis Complex, “There’s often a vicious circle here: the more a person focuses on his body, the worse he tends to feel about how he looks – obsession breeds discontent.

”People with negative body image tend to feel that their size or shape is a sign of personal failure and that it is a very important indicator of worth. Poor body image has been linked to diminished mental performance, low self-esteem, anxiety, depression, sexual dysfunction, dieting and eating disorders. According to a Harvard University article, the brain is the body’s most important sex organ.’

During midlife and beyond, these factors, combined with naturally occurring physical changes, can make you vulnerable to sexual problems. Just about every woman in America compares herself to the women who appear in commercials on television and believe this is what they are supposed to look like. This is the norm. In fact, it is as far from the truth as possible. Many do not realize that the most expensive cosmetic companies use 15-year-old girls as models for their skin creams. What 30-year-old woman doesn’t wish she had the same elastic, smooth skin as when she was 15? Do you think magazine models are all sugar and spice and everything perfect and ideal? Think again. (Remember when your mother always said you had another think coming?) Because of all the media flap of late, most women know that the fashion magazines use the airbrush liberally. Even slick publications like Playboy airbrush photos of all their models and playmates. Every generation has had an image of the perfect body. There were the pinup girls during World War II.

Even though a lot of GI’s had the girls on the inside of their lockers, they would not have traded her for the wife and family back home. Heaven only knows how many boys had posters of Farrah Fawcett in the red one-piece on the backs of their bedroom doors. This is not reality. Women with poor body image may be sacrificing the opportunity not only to have a great sex life but also to share intimacy with a potential life mate. A woman who is ashamed of her body will always want the room dark during sex. She will seem unadventurous in lovemaking because she is fearful that her partner will be turned off by some cellulite or sagging skin. She will wear dowdy, unsensual clothing because she believes she is hiding her flaws. The sexy teddies, thongs, and bustiers should be sold only to those with a perfect body. That long flannel gown is sure to get her man turned on. While there is no perfect body, women with a poor body image that is hindering their sexual pleasure and fulfillment have options.

Today there are totally non-surgical methods to get rid of cellulite, the orange peeks skin and to sculpt a body more to a woman’s internal image of her perfect self. Some cosmetic surgeons require that a patient goes through psychological counseling prior to any procedure. This is to ensure that the patient is not expecting a miracle in her life. If she is poor, she will still be poor. If her husband has left her for a younger woman, he will still be gone. Going under the knife is risky business. The non-surgical treatments are just as permanent as liposuction and other procedures but there is not the risk involved that general anesthesia can cause. The old adage of ‘no pain-no gain’ is no longer true. A woman can have her thighs sculpted to remove fat deposits without an invasive procedure. Bumpy buttocks are a thing of the past.

While we all agree there is no perfect body, we do agree that having a small, uplifting event give a woman a great revitalization in her spirits and encourage her to be more open and sensuous with her man. With just a little work on the area that concerns her the most, she invests in the teddies, thongs, and bustiers. She can turn her flannel gowns into dust rags.

TIPS ON HOW TO LOSE WEIGHT FAST WITH WEIGHT LOSS TEA
November 7, 2018

BENEFITS OF WEIGHT LOSS SUPPLEMENTS
May 25, 2018

THERAPEUTIC GRADE ESSENTIAL OILS: WHAT DOES THAT MEAN?
May 22, 2018